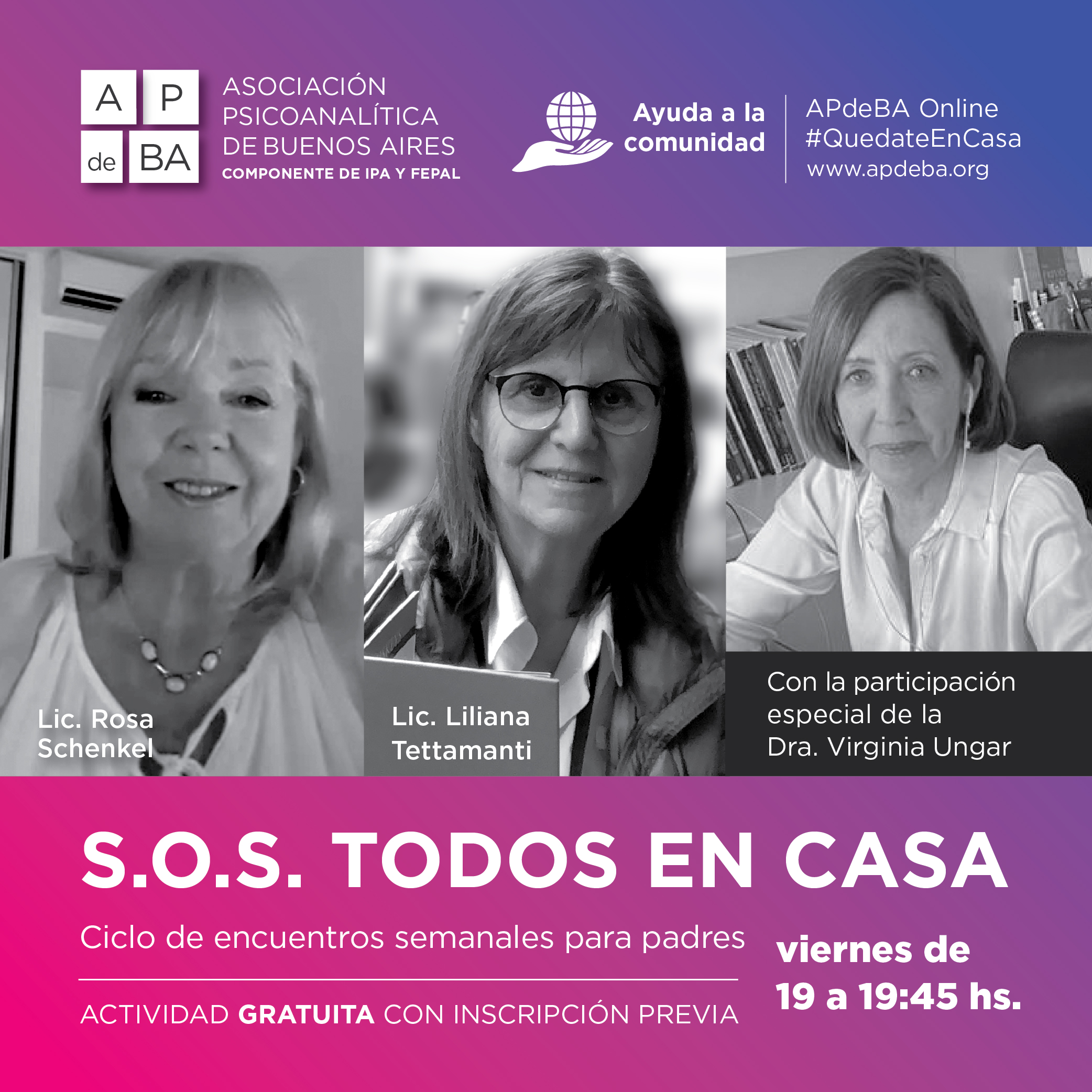 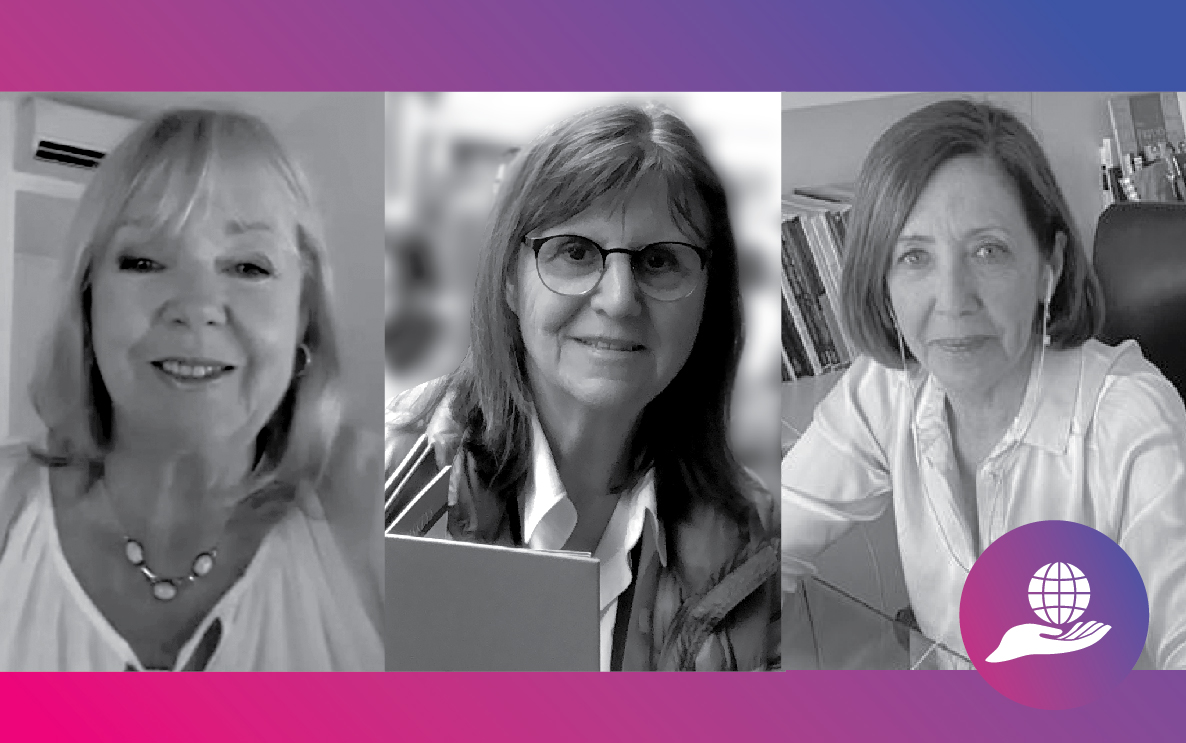 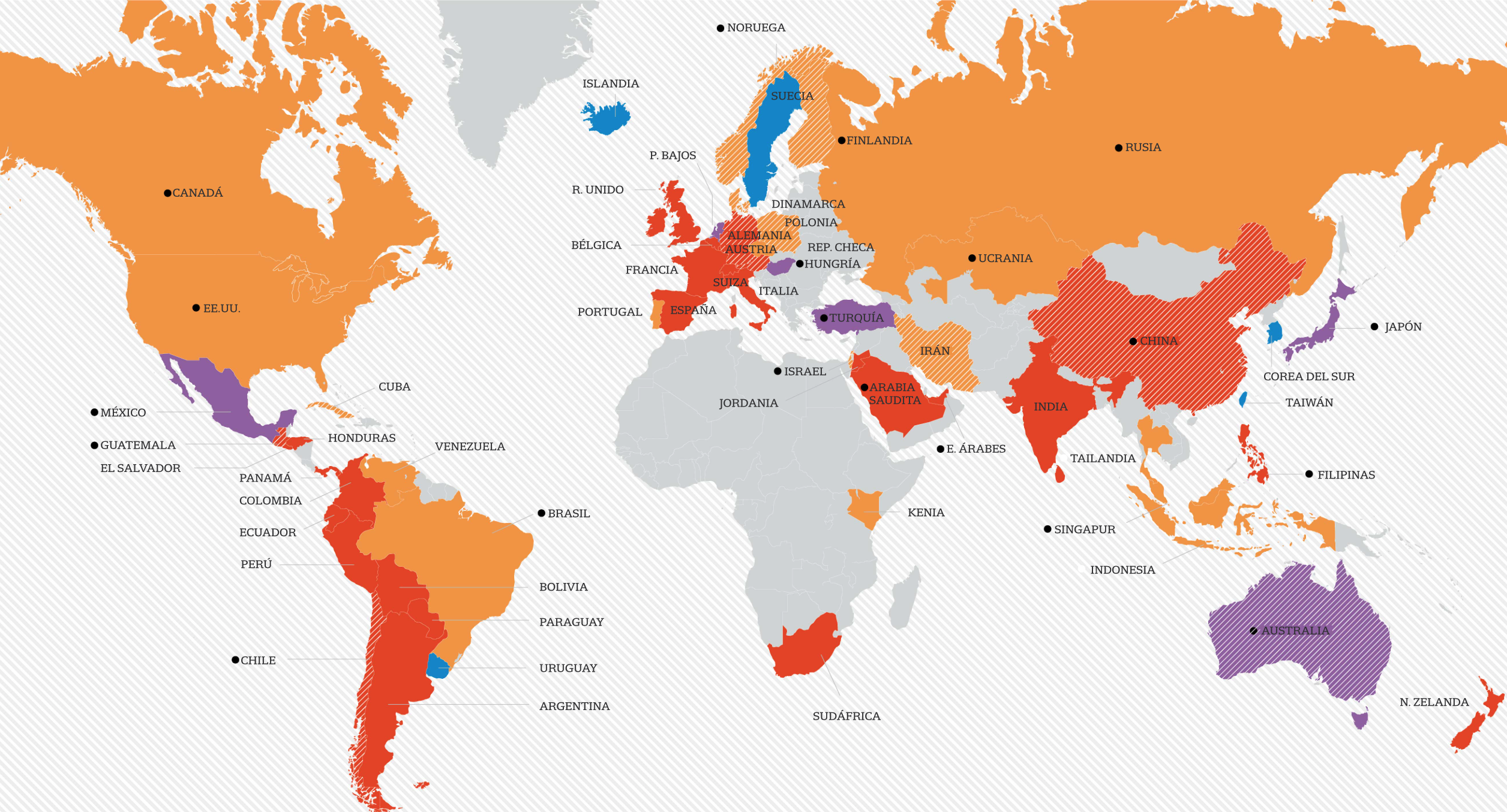 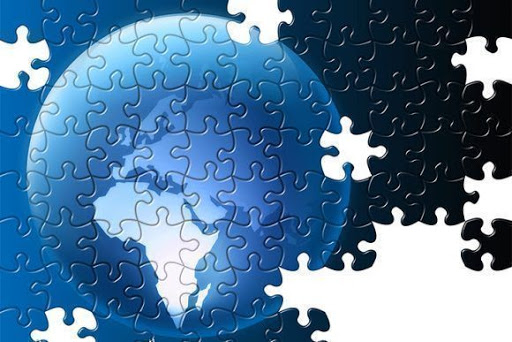 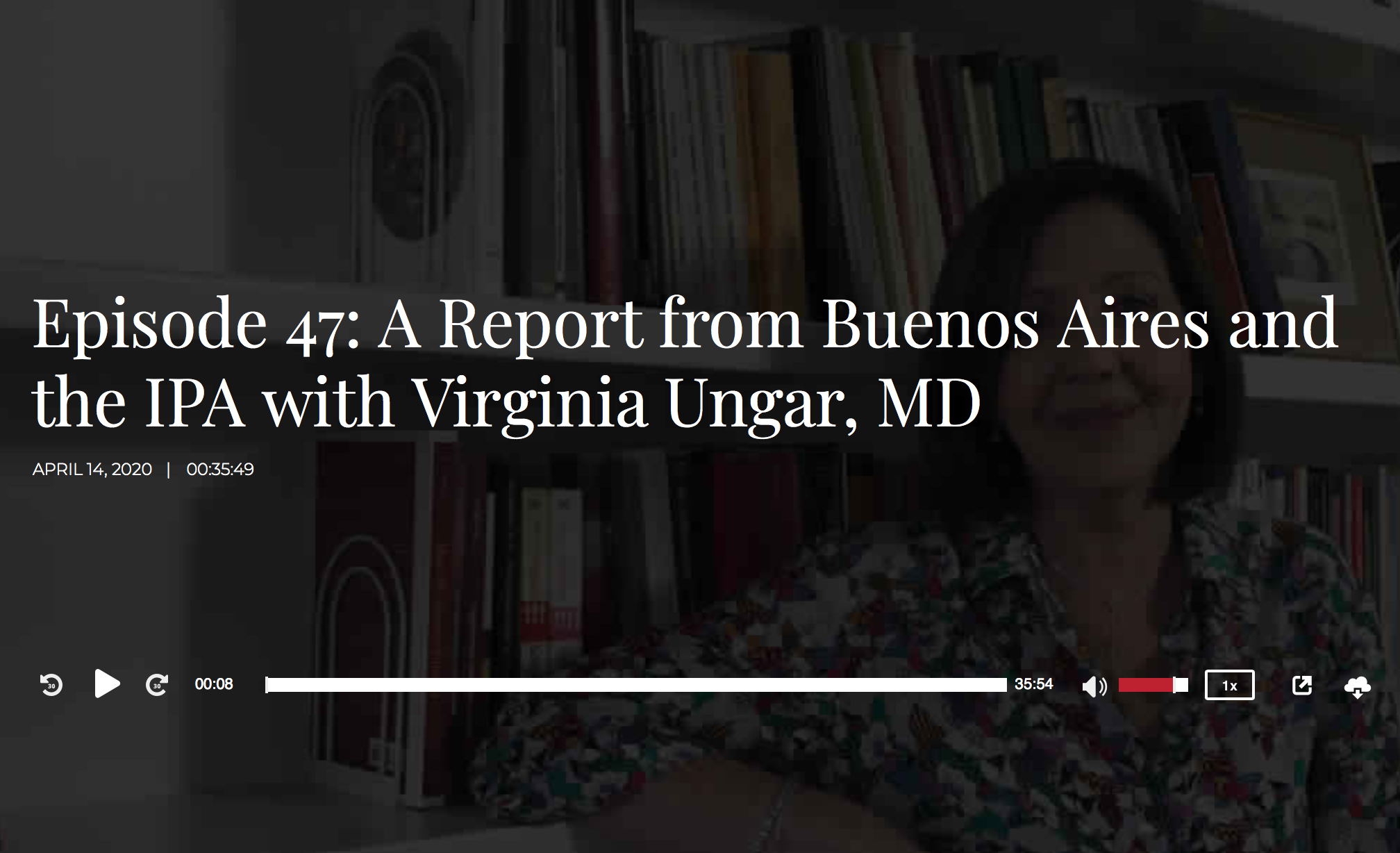 IPA On and Off the Couch

I had an online conversation with Harvey Schwartz on the “IPA On and Off the Couch” series of Podcasts, that he hosts.

In this episode I spoke about how it is for psychoanalysts to move from an in-person to an online experience. I described my personal experience of these changes, my clinical work and what the IPA is doing in the international psychoanalytic community in this difficult time.

Virginia Ungar shares with you the 2020 New Year Greetings video.

COMMEMORATIVE SYMPOSIUM OF THE 60TH ANNIVERSARY OF THE SBPRJ FOUNDATION

Virginia Ungar participated in the round table: “Diversity and plurality” with Ana Sabrosa, president of SBPRJ, Celso Gutfreind, psychoanalyst of SBPdePA, writer and doctor.

She also participated in the celebration for the 60 years of the Brazilian Psychoanalytic Society of Rio de Janeiro: “Plurality: diversity and psychoanalytic maturity”, where FEPAL gave her an interview, SEE HERE

We share the activities in which Virginia Ungar participated in this 57th Symposium / 47th APA Congress, where it was possible to reflect very fruitfully about the CONTEMPORARY PSYCHOANALYSIS and the FUTURE OF PSYCHOANALYSIS.

“WHAT DO WOMEN WANT TODAY?” COWAP

“What Do Women Want Today?”
Meeting organized by the Committee of Women and Psychoanalysis of the International Association of Psychoanalysis (COWAP).

On November 8th, Virginia Ungar was invited to participate in the keynote presentation “Authority, power and gender in institutional life”. This presentation was moderated by Paula Ellman.

Also on November 9th, Virginia Ungar was invited to participate in the panel: “Current theories about the feminine”. The invited panelists were: Rosemarie Balsam, Leticia Glocer Fiorini and Arlene Kramer Richards.

First Latin American Dialogue of the Committee on “Studies on Sexual and Gender Diversity” of the International Psychoanalytic Association (API).

Within this framework, on friday, november 1, at the Argentine Psychoanalytic Association (APA), Virginia Ungar was invited to participate in the opening of the event with Marco Posadas and Leticia Glocer Fiorini.

The activity was coordinated by Beatriz Zelcer

Virginia Ungar coordinated the Opening Panel of the XLI Annual APdeBA Symposium in which the topic of migration was discussed. The guests to the panel were Ana Paula Penchaszadeh, Adriana Kaufman, Marta Lewin and Alberto Perez Cohen.

Freud in Argentina. 80 years after his death

On Wednesday, July 24, Virginia Ungar participated in the OPENING CEREMONY OF THE API CONGRESS.

On Thursday, July 25, Virginia Ungar presented with Ana Langer the panel: SEXUALITY, CULTURE AND WOMEN´S HEALTH. A tribute to Marie Langer. An interdisciplinary dialogue on women and health, working on the interface of Biology, Culture and Psychoanalysis, within the framework of API in the Community. It was coordinated by Harvey Schwartz and commented by Yael Samuel.

On Saturday, July 27, Virginia Ungar participated in the DISCUSSION GROUP: FEMALE LEADERSHIP – A PSYCHOANALYTIC PERSPECTIVE as well as the CLOSURE CEREMONY OF THE API CONGRESS.

Virginia Ungar and Sergio Nick were special guests of the “Freud Bar Event” at the “Freud Museum”. This event was held within the framework of the 25th IPSO Congress in London.

During the 27th edition of the Congress, I was invited to discuss a clinical material in an activity of the Child and Adolescent Psychoanalysis Committee of the IPA (COCAP). I also took part in the Round Table entitled “Vida institucional: (in)confidências e estranhamentos” with: Claudio Eizirik (Chair of the ING and coordinator of the table), María Cristina Fulco (President of FEPAL), y Anette Blaya Luz (Presid of FEBRPASI).

I want to thank the invitation to participate in this important event and I would also like to congratulate all the organizers for this excellent Congress.

Virginia Ungar was invited to the 79th French Language Speaking Analysts Congress (CPLF) in Paris. She thanks the invitation to this fascinating event on the theme: “Psychic Bisexuality, Sexualities and Genders”. This current subject raises debates not only in the field of Psychoanalysis, but also in many other disciplines, and it has a great impact in Culture. She took part in the opening and closing ceremonies of the Congress and congratulated all the organizers and speakers for this interesting event. She also participated in the fruitful Lunch Meeting of the French Speaking Psychoanalytical Societies Presidents.

The 23rd IPA Research Training Program (RTP), that’s held every year in each of the IPA regions, took place at the Mental Health University Institute of APdeBA. We had the pleasure to welcome Mark Solms, chair of the IPA’s Research Committee, and Marianne Leuzinger-Bohleber, organizer of the Conference together with Clara Schejtman. Marianne and Mark were part of the eight invited professors for this program, and they also gave free lectures in different IPA Societies.

Joseph Sandler Conference was held at the Argentine Psychoanalytical Association. The theme was “Psychoanalytic Understanding and Treatment of Depression: Researchers and Clinicians in Dialogue”. I had the pleasure of taking part in the opening and closing panels of the Conference. And I was discussant of Mariane Leuzinger-Bohleber’s paper “Investigating symptomatic and structural changes in the LAC Depression Study: Empirical and clinical findings.”

I would like to congratulate all the organizers of this important event for their hard work, the high quality of the presentations and discussions, and for the great attendance to these events.

Virginia Ungar coordinated the presentation that Marianne Leuzinger-Bohleber gave at APdeBA, it was entitled “Trauma and Transgenerational Transmission: Contribution of (Clinical) Psychoanalysis to the Refugee Crisis in Germany”. Marianne chairs the IPA Migration and Refugees Sub-committee of IPA in the Community, that focuses in a very current issue: migration and the difficulties that refugees have to face. For the IPA it is very important to study the effects that forced migration produces when arriving to such unfamiliar places, with a language they don’t understand and facing a mourning process of having lost everything they knew.

Marianne showed how the First Reception Institution named “Michaelisdorf” in Darmstadt, Germany was built. Marianne was the director of the Sigmund Freud Institute when the Ministry of Social Affairs of the State of Hessen asked her to conceptualize a Pilot Project to support refugees. The project was successfully carried out during the peak of the refugee crisis and for more than one year. The results of the project served as political model for the establishment of four Psychosocial Centres for refugee care in Hessen.

On Thursday 11 Virginia Ungar was invited to the Welcome Meeting of The EPI Training Program on Child and Adolescent Psychoanalysis (CODECAP).

On Friday Virginia Ungar was invited to the IPSO Opening and Welcome Session to address de Candidates.

On Saturday she took part on the Round Table Discussion on the Body in Psychoanalysis and then, on Sunday she presented her paper “Skin-deep: an appealing paradox” on the Third Plenary Session of the Conference.

Basel, Switzerland – January 11 and 12, 2019
Presentation of the paper “Current Changes in Child Analysis”.

56 SYMPOSIUM AND 46 CONGRESS "PSYCHOANALYTIC NEW PATHS: IN THE THEORY, IN THE CLINIC AND IN THE TECHNIQUE"

On Saturday I was also invited to the Round Table “The Analytic Setting’s Vicissitudes” with Dr. Ruggero Levy, Dr. Claudia Borensztejn and Dr. María Cristina Fulco; moderated by Dr. Maria Zulema Areu Crespo.

– November 9 and 10, 2018, Los Ángeles  –
Virginia Ungar was one of the keynote speakers at the Conference of the Women and Psychoanalysis Committee of the IPA (COWAP) entitled “Psychic Survival in the Face of Misogyny: the Dialectic between the Internal & External Glass Ceiling”.

On September 27th Dr. Virginia Ungar took part at the Opening Panel of the Didactic Congress: “Continuities and Changes in the three core ideas of the Tripod and Challenges.”

On September 28th she opened the panel “The Think Tank on the Future of Psychoanalysis and the IPA”. And participated in the Discussion Group “Changes in the technique with children and adolescents”.

– August 24 and 25, 2018 – Sao Paulo
I Biennial Symposium of the Brazilian Psychoanalytical Society of Sao Paulo: “The Self and the Other”
Dr. Virginia Ungar was invited to speak at the Opening of the Symposium.

– August 16th to 18th, 2018 –
X Congress of the Uruguayan Psychoanalytical Association (APU) in Montevideo: “Helplessness”
Dr. Virginia Ungar was invited to speak at the Opening of the Congress along with Susana García (APU’s President) and Clara Uriarte (APU’s Scientific Secretary). She also participated at the panels: “Psychoanalysis, pediatrics and social vulnerability” and “Clinical Psychoanalysis with Adolescents”, and at the workshop “Helplessness and physical pain”.

+ INFO OF THE CONGRESS.

Virginia Ungar, president of the International Psychoanalytical Association, has accepted an invitation from APSA – Asociación de Psiquiatras Argentinos to promote the importance of collaboration between mental health fields during a forum on Psychoanalysis and Psychiatry and a roundtable meeting on 20th April during their 33rd Congress on “El cuerpo en la Psiquiatría. De lo biológico a lo Social” in Mar del Plata, Argentina.

ROUND TABLE. THE PLACE OF PSYCHOSOCIAL TECHNIQUES IN THE TRAINING OF A PSYCHIATRIST. PRESENT PAST AND FUTURE
Coordinator: Tenconi, Juan Cristóbal.
Speakers: Herrman, Helen – Ungar, Virginia – Harari, Angelina.

+ AUSPICIOS OF THE APSA CONGRESS

– March 2018 –
Dr. Virginia Ungar, as president of the IPA, takes part and commented the publication of 7 new API titles representing the vanguard in contemporary psychoanalysis at the European Psychoanalytical Federation Conference in Warsaw.

– January 2018 –
Dear Colleagues,
I wrote to you in August about the decision taken by the previous Board to “in principle permit a frequency of 3 to 5 sessions per week in the IPA’s Eitingon Model”.
I previously wrote to you that, at that moment, absolutely nothing had changed about the minimum standards acceptable under the IPA’s rules. I also promised that we would move forward in a spirit of sensitivity and transparency, seeking a solution which would seek to blend the differing needs and realities.
I am now writing to share the progress made at the Board Meeting held from 13 to 15 January in Costa Rica.
After several very open and frank conversations we have reached a decision which I am pleased to say was unanimously endorsed by the whole Board. The key elements are…

– December 14th, 2017 –
Celebration of the 75th Anniversary of the Argentine Psychoanalytic Association (APA) at the National Library.
In the picture: Alejandro Dagfal, Director of the Argentine Center of the History of Psychoanalysis, Psychology and Paychiatry; Andres Rascovski, APA and Claudia Borensztejn, President of the APA.

– November 2017 –
Argentinian Psychoanalytic Association (APA).
LV Symposium – XLV APA Congress: “The psychoanalytic Field: Interventions and Outreach.”
Dr. Virginia Ungar takes part in the conversation with Deans of Psyschology Degree at degree: “Transmission of Psychoanalysis.”
This activity was carried out before the start of the Symposium within the University working day.

– April 2017 –
Lecture for the Scientific Meeting and Seminars and supervision on Child Analysis at the Finnish Psychoanalytic Society.

The Ballot papers for the 2015 Elections were dispatched to all IPA Members on 4 March 2015. The deadline for receipt of ballot papers or to vote on line for this election was midnight GMT+1 on 31 May 2015. The results below were communicated to all candidates on 4 June.

– March 28, 2015 –
Presenter: “Adolescence: the pain of belonging or not belonging,” at the Adolescence Forum of  the 28 the EPF Annual Conference, discussed by Anna Maria Nicoló and Alain Gibeault, Stockholm, Sweden.

– March 24, 2015 –
Presenter: “Adolescence: the pain of belonging or not belonging,” at the Adolescence Forum of  the 28 the EPF Annual Conference, discussed by Anna Maria Nicoló and Alain Gibeault, Stockholm, Sweden.

-January 14, 2015-
Presenter in Discussion Group 12 of the American Psychoanalytic Association Winter Meeting, “How analytical work with adults is enriched through the practice and supervision of child analysis,” with Caroline Sehon (Bethesda) and Jeanne Magagna (London).

-November 10-16, 2014-
Visiting Professor at the San Francisco Center for Psychoanalysis.